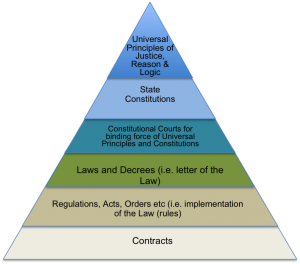 The above Fig.1  illustrates  how Universal Principles of Justice, Logic and Reason, expressed in State Constitutions are made binding by  Constitutional Courts, overseeing that both the constitutions as well as the letter of the Law and subsequent Rules, Regulations, Orders, Acts and contracts are integrally consistent.   This means,  that the Rule of Law cannot tolerate, ambiguities and/or any other logical inconsistencies or misrepresentations in contracts.

Thus, the Law governing contracts is before all else subject to Principles of Justice that can only be determined through a consistent application of logic and  reason.  Such that any contract that can be shown to be logically inconsistent, ambiguous or ill defined, cannot be considered valid.

It follows then, that when on the basis of the language used the validity of a contract ceases,  injustice and discontent inevitably ensues and fundamental  principles/doctrines  are susceptible to being contravened.   Below are some key examples of principles that are jeopardised by vagueness or ambiguities:

Thus,  It can be affirmed, that any untrue claims explicit or implied, by commission or omission, that induce a party to enter into a contract, renders that contract invalid and hence null and void.   So, when money as an object of a contract is misrepresented, that contract must be considered invalid.

While common practices whose invalidity is unknown may be deemed valid by error or ignorance, once the validity of such practices is challenged, then to ignore or in any way censure or obfuscate the facts, logic and reason supporting such challenges, becomes an act of manifest ill will or bad faith.  Such obfuscation,  on its own is sufficient grounds for invalidating all contracts that include the questioned practices and to which the censurer is party to.  Also and according to the following universal principle of validity:

(that which initially is invalid, cannot be made valid in subsequent acts),

it is evident that inherent validity must override all other considerations such that no circumstance such as common or habitual practices can “make valid” that which is invalid.

Breaches of this nature provide the conditions for the systematic erosion of the legitimate exercise of fundamental rights and freedoms as the misrepresentation of money, provides for the illegitimate transfer of goods and services in a broad systematic fashion.

Law, both natural and human when adopted by a State is known as the Rule of Law and requires being administered in a way that is wholly consistent.

Such that when said principles are in jeopardy, any of the following may ensue:

This often results in unbearable circumstances undermining the recognised universal principles of: equality, freedom, and human dignity, among others.

Only the exercise of the right of individual and collective resistance – ultima ratio or last argument or the last resort – can remedy unjust, vile or arbitrary rules.

With respect to the question of the definition of money. The definition of money in terms of two mutually exclusive assertions i.e. money as a unit of measure of value as well as a tradable commodity leads to a logical contradiction undermining both assertions. When a State under condoned practices assumes such logical incoherence as valid and, explicitly or implicitly, makes the realisation of either a requirement e.g. measure of value is compulsory,   it is requiring or forcing an inconsistent application of its rules as the function of measure cannot be made subject to the limits and constraints applied to commodities. Thus and as of the key object of current money contracts,  the inconsistency of the definition of money assumed in practice, violates logical and systematic legal interpretation by directly contravening or inducing to contravene, the higher principles mentioned above.